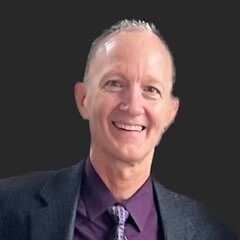 On October 21st, 2022 at the age of 59, David Lee Lemler was lifted up to heaven’s fairways after waging an inspirational battle against pancreatic cancer.

He was born April 3, 1963, in West Bend Wisconsin to Paul and Shirley Lemler. He was the 6th child in a family that would eventually have eight children. David graduated from West Bend High School in 1981 and achieved his bachelor’s and master’s degrees from the University of Wisconsin Oshkosh.

In 1989, while working at Appleton Papers (Appleton, WI), David met Lisa Hensel. A group of coworkers went out to play golf and even though she had never played golf before, Lisa joined them. David fell in love when Lisa was able to hit his Wilson staff irons straight down the fairway. They always joked that golfing was part of her wife tryouts. They were married on January 27, 1995 and in 1997, Dave’s job took them to Denver, Colorado. It was in Colorado that their daughter Avery and son Mason were born.

Through his career in sales, David found his calling connecting with people and developing solutions for them. Dedicated and loyal, David’s professional career spanned only two companies, Appleton Papers and Veritiv (formerly Xpedx). Co-workers, customers and competitors all knew Dave to be a man of honesty and integrity.

A giving, caring and selfless soul, David was forever blessing his family, friends, neighbors and co-workers with his time and energy. He never missed an opportunity to help someone, even without being asked. In his life, he led by example, teaching his children to “leave things better than you found them.”

Above all else, David loved his children and he freely expressed this love to them. He was incredibly proud of the young adults they have become and there is no doubt his legacy and love will continue for them in the future.

David’s lifelong passion for golf and fishing began as a child and continued throughout his adult years. He was an accomplished scratch golfer and returned often to Wisconsin lakes to fish with his father and brothers. When the open road called, he and Lisa enjoyed hopping on his Harley to explore the mountains of Colorado and the western states on their own or with friends and family.

In the simplest of terms, David loved his life. His loss is felt very deeply by those who knew and loved him. David’s zest for life, can-do attitude and compassion for others will live on through those who were lucky enough to have had their path cross with his.

David is survived by his wife of 27 years Lisa, daughter Avery (24) and son Mason (21). In addition to his parents Paul and Shirley Lemler, he is also survived by his siblings: Cindy (Steve) Kuenzi, Robert (Vicky) Lemler, Gregg (Sheree) Lemler, Paul (Barb) Lemler, William Lemler, Judy (Steve) Heun and Roger (Shelly) Lemler; mother and father-in-law Janet and Fred Krier; brothers and sisters-in-law; and numerous nieces and nephews - all of which were his favorite. He was preceded in death by a cherished nephew, Mitchell Heun.

David’s life and legacy will be remembered with two Celebrations of Life. An open house will be held in Colorado at The Ridge at Castle Pines North (1414 W Castle Pines Parkway, Castle Pines, CO 80108) on Saturday, November 19th from 1:00 - 4:00 p.m. The other will be in his home state of Wisconsin in the springtime with details to be announced.

In lieu of flowers and gifts, and to continue David’s generous spirit, please make a donation to your favorite charity in his memory.

The family would like to thank Porter Hospice for the compassionate care and unwavering support provided to David and his family. You are truly angels among us.

“We will never be the same as we were before we lost you, but we are so much better for having had something so great to lose.”