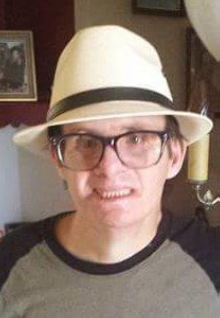 Ronnie was welcomed into this world on October 14, 1959, by Bennie and Gloria (Aragon) Smiley in Denver, Colorado.  He joined his sister, Judy Ingram (Deceased), brother, Jerry, and sister, Sherry. Ron was a very special child as he was born with Down Syndrome and required extra nurturing as a baby. Ron was always happy and had a smile that shined in his eyes and went straight to your heart. He never knew a stranger and would talk to anyone who listened. He was the embodiment of unconditional love. He didn’t care who you were or what you looked like, he just liked you. He grew and thrived far beyond the doctors’ expectations and had a great many accomplishments in his life. He attended Rivendell School in Adams County and upon graduation, he was employed by Adams Industries until 1978, when his parents moved to Denver. He then entered Laradon Hall and was employed there for many years. He also worked at the family print shop, Professional Printers, until 2009, when the bldg. was sold and Professional Printers was downsized. He returned to Laradon and was in the senior and Community programs. He absolutely loved Laradon and was deeply appreciative of the programs Ron was also very active in the Special Olympics every year for many years in the downhill and slalom skiing events, earning gold and silver medals on a few occasions. Ron looked forward all year to Camping and Boating with his family. After his mom & dad quit camping, he camped with his sister Sherry & Tom Russo. I think the 4th of July camping above Grand Lake was his favorite times. Gathering around the fire at night, tossing horse shoes with his nieces and nephews, riding in the boat catching fish, and of course the Ice Cream Store in town! He loved all sports, and participated in any sports activity he could. Basketball was one of his sports, as was bowling. He bowled on a league for a few years and enjoyed that. He enjoyed lifting weights and taking long walks with his mother. Two of his greatest past times were watching the Denver Broncos and WWE. After the deaths of his father, Bennie (2004), and mother, Gloria (2009), Ron continued to live in the house on Eliot St with his sister, Sherry, who had moved in to help her parents and Ron in 2000.  When Ron wanted a bit more independence, Sherry found the perfect host home with Martha Guerra in 2017. He still came home almost every weekend, for holidays and birthdays to share in the family events he loved. He became a member of Martha’s family also loving them as his own. Ron was greatly loved and valued by his family and will be missed by all. He is survived by his brother Jerry (Linda) and sister, Sherry; Nephews & Nieces - Dan Ingram, Ulonda Watanabe, David Smiley, Jenna Ehrle, Rachel Ducar, Bill Cachet and Corrie Rasmussen; Great Nieces and Nephews – Logan Ingram, Mariah Ingram, Aaron Wolfe, Matthew Wolfe, Jessie Escudero, Natalie Smiley, Olivia Smiley, David Cachet, Cameron Ehrle, Connor Ehrle, Jaxson Marshall, Hadley Marshall; and many Great-great-nieces & nephews, cousins and special friends. He was preceded in death by his parents, Bennie and Gloria; Sister Judy Ingram; Nephews Vaughn Ingram and Jeffrey Wolfe; Special friends Tom Russo, Rob Holcombe, Eileen Russo and many others whose lives he touched.