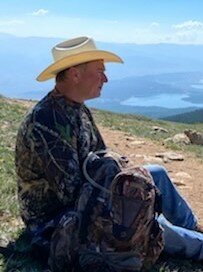 Tom Reuter, 61, passed away peacefully on Sunday, September 25, 2022, at 4:35 A.M. at his home in Aurora, CO. Born in Greenfield, IN on January 1, 1961, to Robert & Ann Reuter, he is survived by his wife Paula and their two sons Blake (Abbie) Reuter of Missoula, MT; Cole (Ty) Reuter and granddaughter Reese of Franklin, TN.

He graduated from Purdue University in the Spring of 1983 and married his beloved wife, Paula, on July 16th, 1983, whom he was married to for 39 years.  Tom worked as a Construction Estimator and Project Manager for 40 years. His work ethic was second to none.  A lifelong devout catholic, he was very active in the church and even taught C.C.D. to young adults for 12 years. He was active with Big Brothers, Big Sisters as well as the Knights of Columbus. To say that Tom was an avid and accomplished outdoorsman would be an understatement.  He was always looking for the next opportunity to hunt, fish, trap, or do anything outdoors. He made a lasting impression on every single person he met. Arty was a man of faith who left a legacy of love. He will be deeply missed by all who knew him.