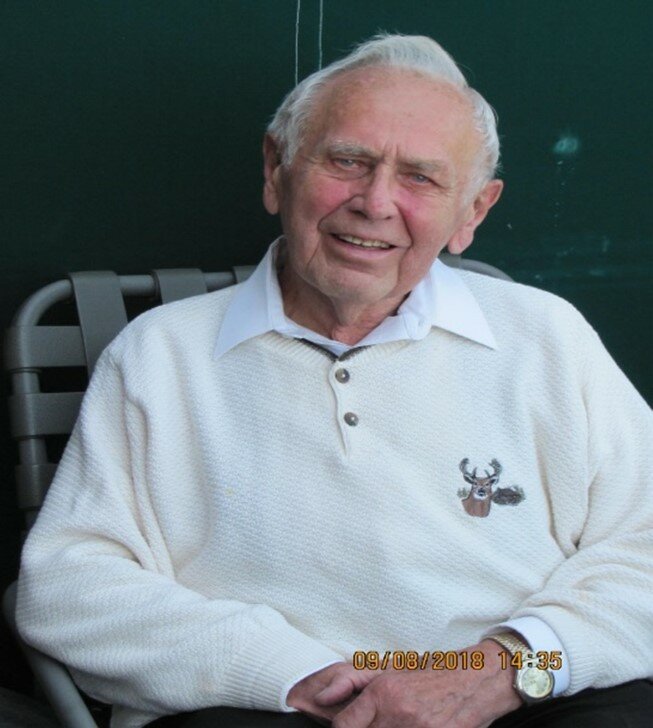 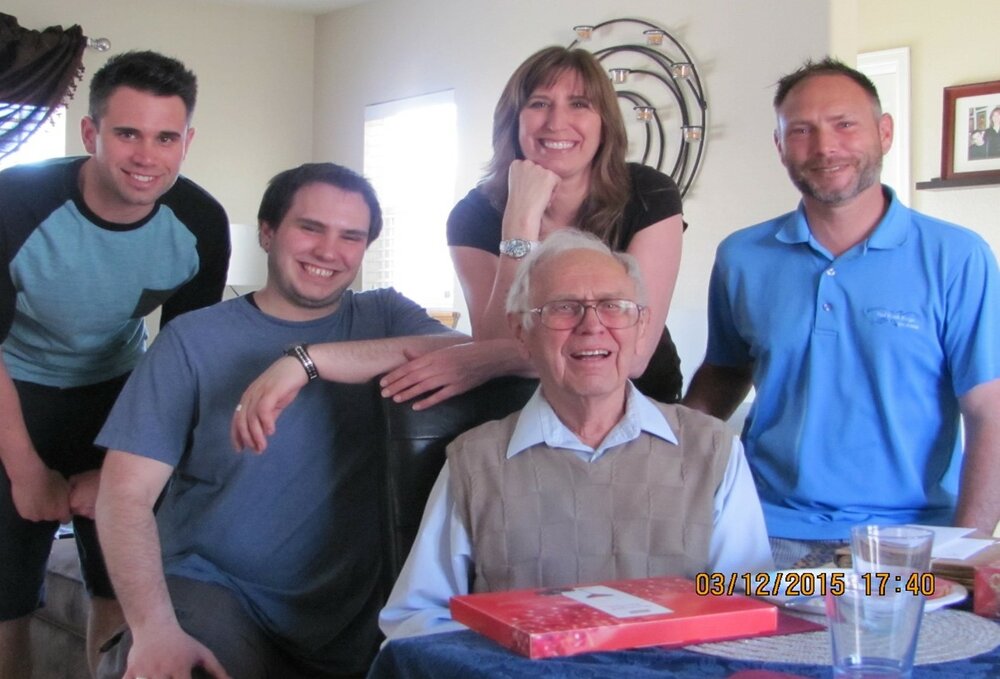 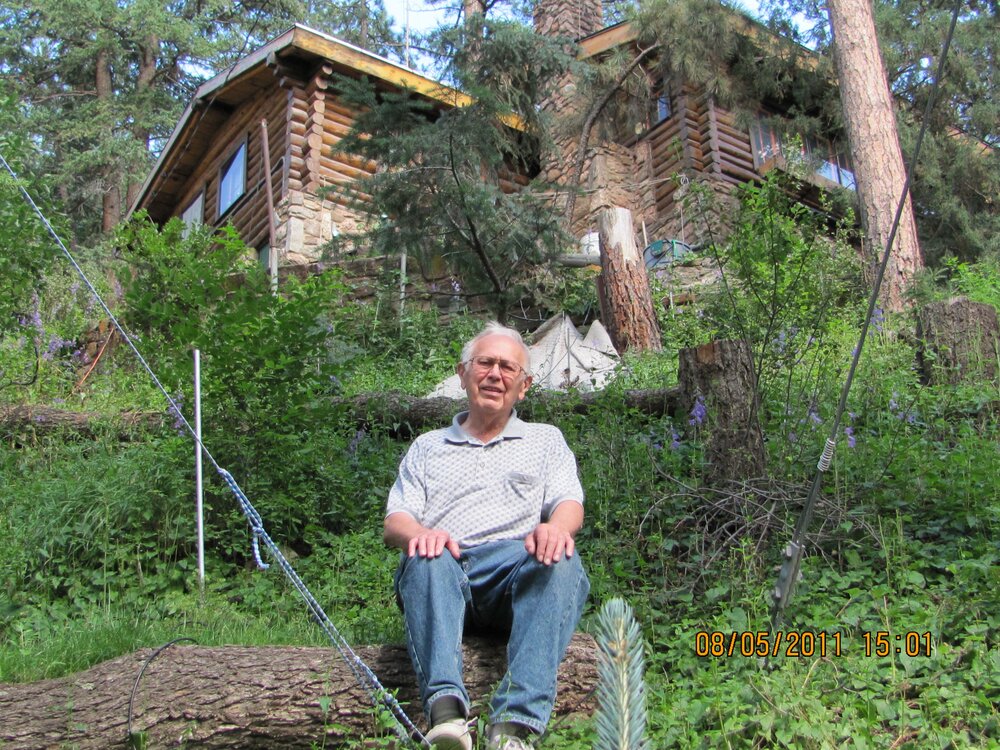 Ludwig Wolfert died peacefully in his sleep in the early morning hours of July 26, 2022.

Ludwig lived in his beloved cabin on Deer Creek Canyon Road for 41 years. In July of 2021, Ludwig moved to Lincoln Meadows senior center to an apartment in independent living. Ludwig made many friends at the senior center in the brief time that he lived there.

Ludwig was born in Würzburg, Germany in March of 1930 to Georg and Marga Wohlfahrt. Ludwig was one of three children; he had an older brother who died of leukemia at the age of five, and a younger sister, Elisabeth, who died at the age of seventy-six.  Ludwig’s sister had disabilities and he helped support her until the day she died. The German name Wohlfahrt means ‘well-being health’ but Ludwig changed the name to Wolfert after his children were born.

As a young child, Ludwig lived through World War II in the Bavarian town of Ochsenfurt, Germany, where his father managed the railroad station. The war had a deep effect on Ludwig; he frequently spoke about the hardships of war including the bombings and lack of food. A life-defining moment he often spoke of was a story that prompted his decision to pursue higher education in the field of Electrical Engineering. When the German people were liberated from Nazi control, the American soldiers destroyed his family’s radio. He quickly fixed it to listen to music, thus sparking his interest in electronics. Ludwig attended college at the Technical University in both Munich and Berlin, graduating in 1956 with a master’s degree in Electrical Engineering. Although his family experienced great hardships during and after the war, his parents always supported his pursuit of education, a tradition he carried forward into his adult life. Ludwig’s parents offered to pay for him to receive his doctorate in Electrical Engineering. He did not go on to get his doctorate but always spoke highly of his family's sacrifice for his education.

After receiving his degree, Ludwig worked for Siemens in Germany. He moved to the United States at the age of 28 with 4 other German scientists, individuals with whom he became lifelong friends. When living in California, Ludwig met Marcia Edwards in Santa Barbara, and they were soon married at the Mission in 1963. After they were married, they moved to Clearwater Florida upon receiving a job with Honeywell. While living in Florida Elisabeth a daughter was born named after Ludwig’s sister. The family moved to Littleton Colorado in December of 1965 after receiving a position at Martin Marietta in Littleton Colorado. Ludwig loved the mountains and felt that Colorado had a similar landscape as the area he grew up in Germany. In Littleton Colorado December of 1966, they soon welcomed a son, Eric, into the family. Ludwig spoke of his trips driving from Denver to California and Washington to visit Marcia’s family and old friends in Santa Barbara. Ludwig had a large light blue station wagon that he placed a mattress in the back, he would leave after work and drive all night when the kids slept.

Ludwig spent his career with Lockheed Martin as a Senior Staff Engineer, retiring from the company after 32 years. Here he worked on projects including the Viking program and Zenith Star, both of which included space probes successfully traveling to Mars. Ludwig is a patent holder for several devices including a handheld device that detects the presence of uranium in the soil.

Ludwig divorced in 1977, and later married Laryssa Hunka, a Ukrainian and Canadian citizen, and gained a stepson, Oleh. In his retirement, the two of them loved to travel around the country and through much of Europe. They were happily married until Laryssa passed away in 2001. He continued to travel in his later life with his close friend, Pony Amen. Pony and Ludwig traveled to Thailand, Vienne, Amsterdam by ship, and Mexico. In Thailand, Ludwig was impressed by the people that had little but lived happily with a simplicity of life. Pony suffered a massive stroke and Ludwig stayed with her to help her until the day she died.

Ludwig lived in his beloved cabin home until the age of ninety-one. Even in his later life, he would use his engineering background; he created a watering system for the young trees he planted on the property and built an outdoor deck and bridge, expanding his living space into the outdoors. He enjoyed watching and feeding the squirrels and birds while blasting classical music. He loved to show visitors the work he completed and the beauty of the wilderness right outside his door.

Ludwig was proud to be educated and worldly, staying up to date on current events and traveling to faraway places to experience their cultures. He found joy in picnics, fine dining, arts, theater, music, and dance. He valued each day he spent with family and being fun-loving, humorous, dependable, financially sound, and kind. Ludwig would help anyone in need by helping, a smile, or even a joke. Ludwig instilled these values in his children and in his grandchildren often dubbing them “lectures” to pass on his wisdom.

In lieu of flowers, donations to The Red cross or any charity to aid in the Ukrainian war would be appreciated. Both the mission of The Red Cross and aid for the Ukrainian war efforts were dear to Ludwig’s heart.

Ludwig’s favorite quote: Man must evolve for all human conflict a method which rejects revenge, aggression, and retaliation. The foundation for such a method is love. – Martin Luther King

Quote Ludwig had framed: There is enough room in the smallest hut, for those who absolutely love one another.

Ludwig’s favorite quote: Man must evolve for all human conflict a method which rejects revenge, aggression, and retaliation. The foundation for such a method is love. – Martin Luther King

Quote Ludwig had framed: There is enough room in the smallest hut, for those who absolutely love one another.

Ludwig was cremated on August 5th at All States Crematory his remains will be handed back to his family and returned to Germany where he will be laid to rest at his family grave.

To send flowers to the family or plant a tree in memory of Ludwig Wolfert, please visit Tribute Store
Sunday
28
August