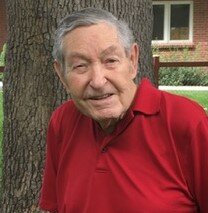 He was born Feb 13, 1929 on the farm and ranch that had been established by his grandparents in 1870 in the McCreaville community in Lampasas and Burnet counties in Texas.

When he was a young child, his family moved to Nix, Texas where his parents operated the Nix Store.

pecans. By the time Abe started to school, he and his family were living in Cherokee, Texas, where his

father and mother operated a general store and cafe, and the family lived on the second floor.

His father ran the store and mother was the cook.

Unfortunately, a fire destroyed their home and business, and in November 1941, Abe and his family moved back to the farm where he was born. Abe recalled stories of life in the country working the livestock, milking cows, tending the five-acre garden, and that times were hard. He told stories of how he and one of his brothers would try to catch squirrels to eat for dinner.

At the end of each summer, Abe and his family attended the annual Methodist Camp Meetings along Cherokee Creek near Bend, Texas, which two of his grandfathers helped organize. Abe was baptized in the creek during one of those camp meetings.

Abe began attending school in Lampasas in 1941. He graduated from Lampasas High School in 1946, and was a lifelong fan of the Badgers.

Abe enlisted in the Army in 1951 and served during the Korean War, being stationed in Germany in the 53rd RCAT Detachment. Upon leaving the service, he went to the University of Texas at Austin, graduating in 1958 with a degree in Petroleum Engineering. He joined the Skelly Oil Company and was sent to several U.S. states and into Alberta Canada where he met the love of his life, Marilynn Johnston.

Marilynn and A.W. were married for 53 years until Marilynn’s passing. They lived in Nebraska for a short time, before settling in Lakewood, Colorado in 1967, where they raised their two children, Shawna and Carey.

Abe continued to work for Skelly for 27 years as it transitioned to Getty. He was a collector of arrowheads, coins and stamps and had very handy skills home improvement and furniture refinishing. He frequently helped neighbors with fix-up projects and emergency repairs. He was also an avid photographer, and worked diligently to raise vegetables and fruit more common to Texas in the backyard of their Colorado home.

Family was very important to him and he kept in contact with his brothers with weekly phone calls to Texas, joking and sharing stories. Known for his gentle nature, perpetual smile and quick wit, he was known as ‘such a sweet man’ by all that knew him.

Durward Landers. He is survived by his daughter Shawna Landers, of Lone Tree, Colorado, daughter-in-law, Laurie Landers and granddaughters Sarah and Monique Landers, of Orlando, Florida, and numerous nieces, nephews and great-neices and nephews, most of whom reside in Texas and Canada.

The family would like to recognize and thank Greg Stransky for supporting Abe and the family in countless ways for many years, Jerry Brown as a lifelong friend of Abe’s, and a special caregiver/nurse, Katherine Barriero , who made him smile every day she was with him.

A family memorial bench is in place at Mt. Lindo Cemetery in Morrison, CO. In lieu of flowers, those wishing to make a donation, may do so in Abe’s honor to DMK Rehoming a non-kill rescue: https://dmkrehoming.com/donate .