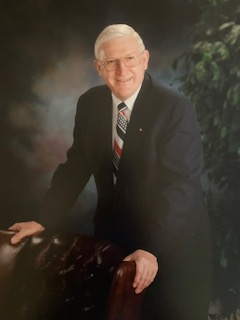 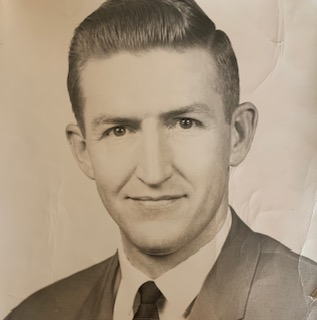 Neil Allen Wilkins, Sr., 88, died March 20, 2022 at Porter Hospice Care in Centennial, CO.  He was born in Batesville, AR on December 12, 1933 to the late Iva and Arthur Wilkins.  He was preceded in death by his parents; his sister, Alma Evans; and a nephew, Nick Evans.

After graduating from Batesville High School and attending Arkansas College, he graduated from the Southwestern School of Banking at SMU in Dallas, TX. He began a successfull and well-respected career as a bank officer for more than 40 years.  He was a lifelong Razorback fan and a lifelong resident of his beloved state of Arkansas until his later years when he moved to Colorado to be near his daughters.

He was very active in numerous civic organizations throughout his career but took great pride in his affiliation with the Jaycees, holding offices at the city, state and national level. He enjoyed entertaining delighted audiences with his singing and did so well into his last years. One of his proudest moments was being named King White River of his beloved hometown of Batesville, AR.  He was a proud follower of Christ and served as a lay minister, traveling to small congregations in Arkansas to share the gospel.

He is survived by his college sweetheart and wife of 67 years, Beverly Sims Wilkins; his three daughters, Dawne (Hans) Eliassen of Colorado; Tracy (Cliff) Adcock of Colorado; Leslie (Dave) Wommack of Mississippi and his son and namesake, Neil A. Wilkins, Jr. (Sheila) of Arkansas. He dearly loved his 5 grand children and ten great-grandchildren.

A memorial service is being planned.  Memorial contributions can be made to First United Methodist Church, 615 E. Main St., Batesville, AR where he was a proud member of the Chaney Sunday school class.
CAUTION: This email originated from outside of the organization. Do not click links or open attachments unless you recognize the sender and know the content is safe.