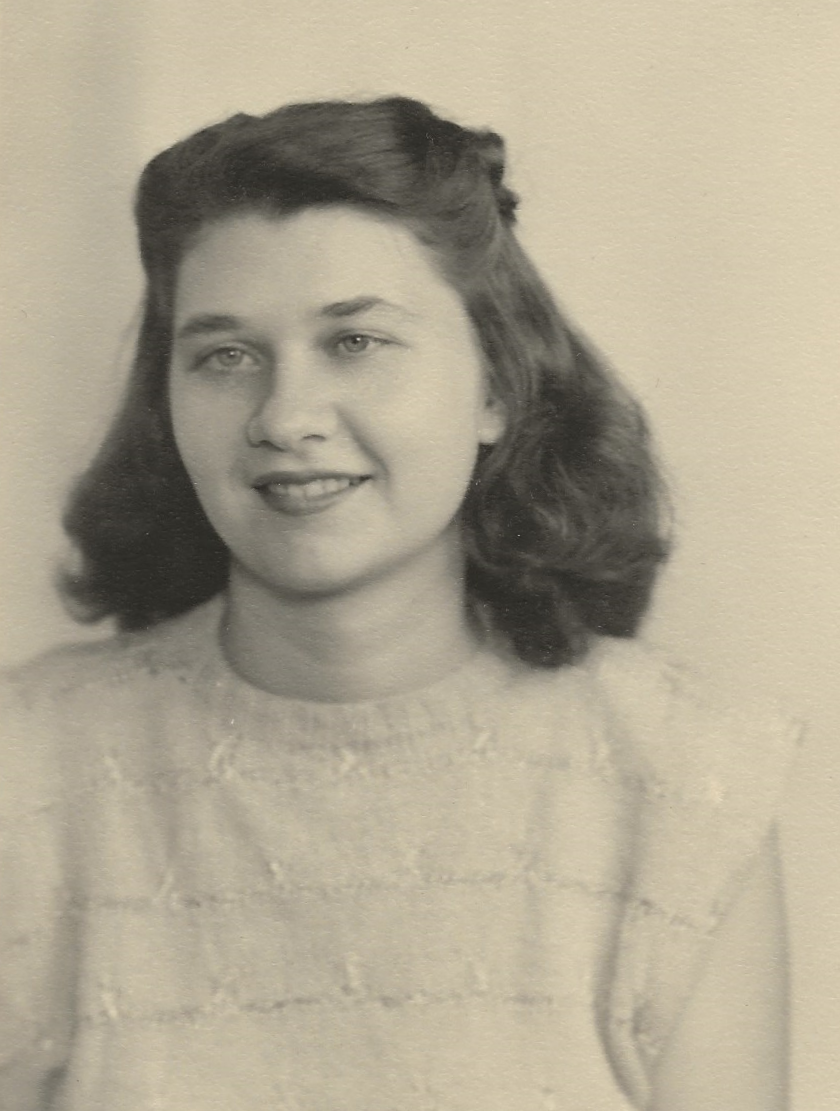 Bethel Merilyn Carne McCoy died early March 5, 2022 in her home at the age of 94 after going into hospice care on February 3.  Both her daughters were there.  (photo was taken in 1949)

Bethel was born January 13, 1928 as the older twin in Pierce, Nebraska.  The Methodist Church at that time was moving their ministers every three years. Beth's family soon moved to Rosalie where her father Douglas Bland Carne served in two churches at Rosalie and Walthill.  When she was five, she lost her father to pneumonia and a few months later her 12-year old brother John Boyd to a truck-bicycle accident.  Her mother Hazel Belle Carne moved her family of kids Gerald, George, Rosella, Bethel and Ethel to University Place; Lincoln grew around University Place.

Their new house stood in the middle of 3 lots and had an outhouse.  They grew vegetables and potatoes, kept a goat and a chicken coop.  The chicks came by mail order.  They had a cherry tree, a walnut tree, and an apple tree with 6 different grafts.  Beth helped George with the chickens.  George would hire himself and his sisters out to pick strawberries.  Having been married, Hazel was not allowed to go back to teaching, but she found a job teaching English to immigrants that worked the railroad.  She later developed film in a camera shop.  Jerry got jobs with a cobbler and an electronics store.  Jerry attached a wire and speakers to a neighbor's radio so they could hear the radio when the neighbors had it on.  They played table tennis on the kitchen table.  Ethel had a bicycle.  George played football.  They took a trolley into town to shop or go to the movies.  All of the kids went to Nebraska Wesleyan University.

During World War II, Beth cleaned the interiors of huge airplane parts that had been molded.  She also worked in a pharmacy, at a drive-in movie theater, and at the telephone company.  She got into photography.  Beth met James Edward McCoy at Nebraska Wesleyan University.  She married Jim at age 20.  She went with Jim to Iowa State University at Ames where he earned a Masters degree in psychology.  While in Iowa, Beth worked in the rat lab for a professor studying nutrition.  Later she worked the switch board at the Independence State Hospital where Jim was the Personnel Director.

Beth and Jim moved to Colorado in the late 1950s.  Beth had three children:  Yova Lynn, James Brian, and Sharon Dee.  During her time in Colorado, Beth worked for the Colorado Education Association, Chintz 'n' Prints making draperies, did babysitting, worked in a nursing home, built dulcimers and balalaikas for the Hughes Dulcimer Company, sewed for various cottage sewing companies that remade T-shirts and baby bottle covers, and did bookkeeping at a publishing company that put out the Denver Business Journal.  She did alterations and designed clothes for her own company Sew Special.  She loved to garden and loved the mountains.

Her first love was sewing.  Her mother let her take their treadle sewing machine apart, oil it, and put it back together.  At 13, she was doing alterations in a department store. She sewed clothes for herself and her sisters.  She sewed her twin sister Ethel's wedding dress which was worn again by Ethel's daughter Barb Lux.  Beth sewed lots of clothes for herself and her two daughters.  For a special function, her daughter Sharon drew a picture and Beth created a dress from the picture.  This same dress, with a few alterations, has been worn by Sharon's daughters Heather and Erin.  Beth got interested in quilting in the 1970s.  She loved going to sewing seminars.  She enjoyed doing machine embroidery.  She taught us knitting, crocheting, and embroidery.