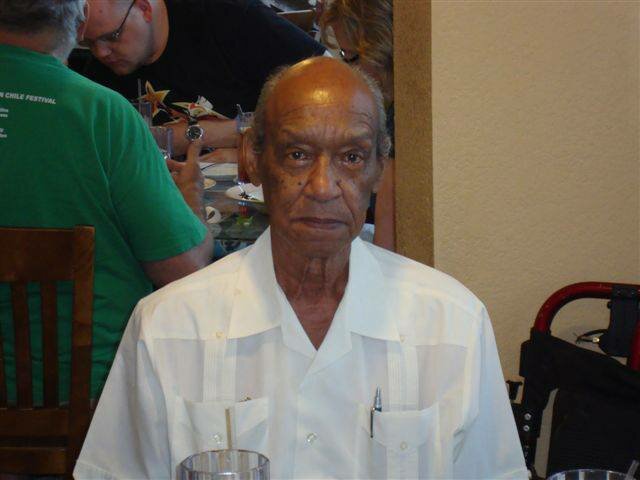 George Howard Cooper Jr., a retired postal worker who lived in Montebello, passed away at 92 in Aurora during a brief hospitalization. He was born in Emporia, Kansas, the fourth of eight children of Ruth (Jobe) and George Howard Cooper Sr., a Pullman porter. He was a child of the Depression who knew want. When his parents lost their home, he spent a few years living with his father’s foster family, the Coopers, in Paola, Kansas.

George was a mild-mannered, easygoing man who liked to “conversate”—a primary form of entertainment in the small towns where he grew up. His own father was sickly, causing him and his brothers to have to work at odd jobs to help support the family. Those circumstances led to him dropping out of the eighth grade before returning for high school. He later earned a GED.

As a child, George met the girl who would become his wife, Maxine Mosby, whose grandparents lived across the street in Emporia. After she enrolled in Kansas State Teachers College there, the couple eloped in Raton Pass, N.M. in 1951, a month before he was drafted into the Army during the Korean War. He served as a radar computer operator with 45th Anti-Aircraft Artillery at Ft. Bliss, Texas and the 552d Anti-Aircraft Artillery in Germany, Kneilegen Barracks, Karlsrud West, on Rhine River southeast of Manheim Air Force Base. One of his Army buddies was Ernie Banks, whose baseball career with the Chicago Cubs he followed closely.

After George’s discharge in 1953 as a corporal, the couple moved to the Pueblo area, where his wife had relatives, before settling in Denver. He took college-level accounting courses at Barnes Business School under the GI Bill and worked as a postal clerk at the terminal annex near Union Station. For a few years, he worked full-time jobs both there and a state agency in Denver, until his slender body could no longer take the 80-hour work weeks.

George had wanted to be an accountant (“I was always good with figures.”), but racial discrimination and a growing family of five children left that ambition largely unfulfilled. He did develop a sideline of doing tax returns for friends and coworkers—long before TurboTax—a tradition his daughter Sheryl has picked up. His best friend, the late Willie Williams, had a master’s degree in accounting. But he too worked at the post office. When his children were young, they’d jump in the bed with him after he woke up or sometimes waking him up. His response, with his forearm covering his eyes, was to drill them gently but insistently in math.

In 1978, George retired as a letter carrier in Aurora, a job he loved, walking around outdoors and engaging people on his route in conversation and getting to know the latest about their families. He later worked as a taxi driver, skycap, and courtesy car driver for a rental car company.

George was an intelligent man who loved to read newspapers, including the New York Times, Washington Post and Boston Globe when he visited his sons on the East Coast. He would literally read them cover to cover. A granddaughter once inquired why he liked the Times so much. “There’s a lot of news in it,” he replied.

George was generous in his judgments of other people. The few people he had anything bad to say about, well, you knew they really deserved it. He liked to play cards, another small-town pastime, especially whist. His favorite bid: “4 no” trump. In his later years, he enjoyed going “up to the hills,” the casinos outside Denver. If slot machines still had one arm, he would have broken one a long time ago.

He liked oxtails, catfish, greens, shrimp, strawberries, and strawberry ice cream. He had limited skills in the kitchen even though his father was a good cook and prepared most meals when he was not away working on trains. Pops—as his son Kenneth called him—really enjoyed being a great-grandfather, giving his great-grandchildren pocket money out of his limited retirement income and continuing a tradition he had begun with his children—giving them nicknames. The youngest of his descendants was born a year ago on March 20, the first day of spring. His great-grandfather dubbed him “Springer.”

George valued his independence. At 92, he was living alone in an apartment building for seniors and stubbornly refused his children’s entreaties to use a cane or walker after several falls that fortunately did not injure him. He wanted to stand on his own until the end.

His marriage ended in divorce. He is survived by sons Clifford of Landover Hills, Md. and Kenneth of Boston; daughters Sheryl Traylor and Verniece Vafeades, both of Denver; brother Jack of Pacoima, CA and sister Beverly Marable of Monrovia, CA; three granddaughters, Latasha Cooper, Shaunay and Mikhail Vafeades; and six great-grandchildren, Detajinae Kelly of Allen, Texas; and Deejahney Kelly, Brazil and Jayden Hoyle, and Lyric and Legend Swift, all of Denver. He was predeceased by son Ronald, brothers Kenneth and Jerry, and sisters Barbara Zeeley and Betty Jean King.