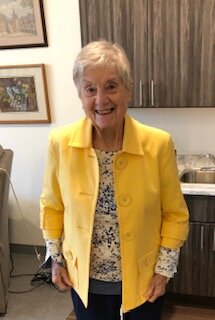 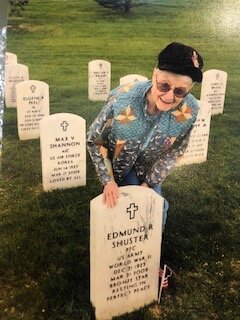 Irene was born on October 15, 1927, in Natick, Mass. to Lester and Ruby Tyler.  The family stayed in Mass. for about 2 years before moving to Loveland, Co. and then back to Mass for a short time. When Irene was 5 years old, her Grandpa Smith fell off a haystacker and broke both of his feet.  Ruby and the two children came back to Cedaredge, Co. to care for him.  During that winter, both children were seriously ill.  Irene had a serious ear infection which resulted in mastoid surgery, partial hearing loss and missing half of first grade.

In 1933, the family moved to north Denver.  Irene graduated from North High in 1945 and went to work for Hover Motors Ford.  She married Bob Richardson, a local builder and real estate developer, in 1946.  After her 3 children were in school, Irene went to work at Van Schaack Real Estate and then Olinger’s Mortuary. The family resided in South Denver and Westminster.

She worked for the State of Colorado for several years and then took time off to earn an Associates Degree in Accounting. She returned to work and retired in 1986 after 21 years of service.

After her divorce in 1961, she met and married Edmund Shuster, a father of 5, in 1963.  They lived in Wheat Ridge before moving to Littleton.  They were active with their families and remodeling & finishing houses, gardening & travel until his death in 2009.

She was very involved in Al Anon for many years and tried to live the values taught, setting high standards for herself without being judgmental of her family and friends. And she was known for hobbies like making ceramic dolls, stick horses for children, flower arranging and acrylic painting.  There wasn’t anything she couldn’t  do with a sewing machine— from doll clothes to matching dresses for her granddaughters to upholstering chairs.  She once even reupholstered a car! She was proud of the fact that she had made 18 quilts when she was in her 90’s!

Her 90th birthday was celebrated at River Point by friends from St James Episcopal church, buddies from water aerobics, quilters, Al Anon friends and dozens of relatives. The last 2 years were spent in Assisted Living in Greeley.

In lieu of flowers, please share a smile and loving memories with friends and family.