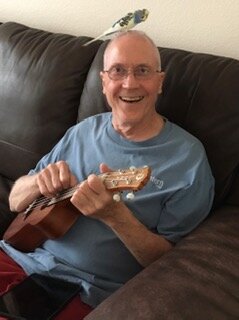 Sam Bush was born and raised in Denver’s beloved Park Hill neighborhood, baby brother to Lonna (Bush) Jones and Steve Bush and big brother to Susan Bush.  As a young boy, he was always a helping hand to his mother Mary (Stookey) and strapping father Lionel (L.J.) Bush - packing dad’s lunches, tucking the bed sheets in just so, hammering nails alongside dad when he was allowed.  Probably singing "what good have you done in the world today..." all the while.

Later, his myopic big blue eyes and undeniable charisma captivated the teen audiences around town as front-man to a local favorite pop band in the early 60’s  - Boenzee Cryque - topping the charts on the local station KIMN with their take on the hit “Still In Love With You Baby”.  The same blue eyes and charisma captivated the love of his life, Rosie (Wernet) and a shotgun marriage ensued - proven to endure fifty seven devoted and loving years, filled with laughter and music and backgammon and scrabble and two hippie spawn, Whitney (Hamblin) and Gram. Never a better father or doting husband will you ever find.

Rock and roll was not going to support this family of four, so he took a job at Western Cine motion picture and film lab, which opened up a whole new creative skill that he mastered - optical printing.  Living nearby in Wash Park, he often roller-skated in to work to the delight of pretty much everyone.  He spent thirty years there very well admired by co-workers and clients alike, with his most notable work being the collaboration with the late experimental filmmaker Stan Brakhage on many of his acclaimed experimental films, especially "Cannot Exist" which was in tribute to son Gram's sudden & heartbreaking death in 1994 (R.I.P.)

A few trademark hobbies he really enjoyed in these later years were bowling, playing a mean ukulele, baking incredible pies and scones, raising the peerless and loquacious parakeet (Diggity) , and without fail - doting on his Rosie selflessly.  He was affectionately dubbed as "Bumpa" by his darling granddaughter Olivia (Hamblin), and the moniker stuck with many who met him.  Unfortunately, a terminal cancer diagnosis in 2020 lit a fire in him to make sure his soulmate would be taken care of - so he spent his last healthy year meticulously planning and packing and preparing to move the household back to his good old 80207 zip code.  He really liked to be busy and useful after all.

He passed well loved, taken care of and hopefully at peace in his new home.  He was a very, very good and kind man indeed, (a proclaimed feminist even!) and will be remembered fondly by everyone who had the good fortune to know him.  He lived a life of good example for us all. One night near his final day, he tearfully expressed that he wanted to make sure that everyone knew that he loved them.  Please take this message to heart when you remember him.