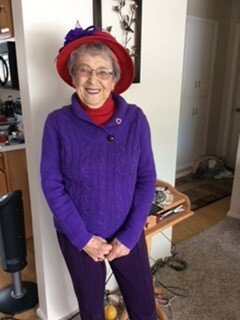 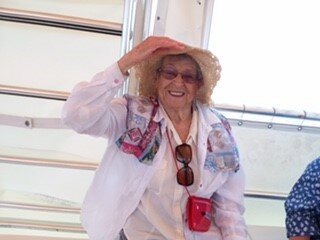 Bette was born in Grand Island, Nebraska May 15, 1923 to Jerry Joseph Cerney, and Florence Ellen (Wells) Cerney.  She was the eldest of two daughters.  She grew up in Nebraska and graduated from Elba Consolidated School.  After graduation she worked at the Cornhusker Ordnance Plant in Grand Island, NE.

She married Frank R. Laimbock February 1945 and they resided in Grand Island, where their daughter Jerrilynn was born August 30, 1947.   In 1949 the family moved to Fruita, CO where her mother had moved a few years earlier. They purchased ½ acre of property and built their home.  Their son, Steven Michael Laimbock, was born May 18, 1952.  They moved to Mexican Hat, UT in 1957 where Frank was employed, then lived in Idaho briefly before moving back to their home in Fruita.  Bette was a homemaker.

Bette married Keith G. Charles in November 1968 and moved to Arvada, CO where he had a home. Keith had two daughters, Sandra and Sonja Jill.  They eventually built their new home on W. 72nd in Arvada. Keith passed away July 11, 1975.

She worked at several jobs until her retirement, and could then devote her hours in her garden, and lovely yard.  She was active in the Silver Sneakers exercise program and went to water aerobics at APEX Rec Center in Arvada several times a week well into her 80’s.  In 2010, she sold her home and moved to Golden, CO to live with her daughter, Jerrilynn Tucker.

Bette was active in the Disabled American Veterans Auxiliary #7, the Living Waters Unity Church in Arvada, and the Golden Rec Center where she continued to go to exercise classes several times a week until Covid restrictions prohibited this.  She belonged to Ruby Red Rascals Red Hats group.

She loved to travel, and she and her daughter Jerrilynn  took two cruises to Alaska, and to the Panama Canal.  There were several trips with niece Lynn Haas (Gerry) to Cancun, and Grand Cayman where swimming with the sting ray was a memorable experience.  She and her daughter made several trips to Sanibel Island, FL with her niece Gail Tinianow and husband Marty.  She loved shelling on the beach on those trips to make crafty things with them at home.

She and her daughter, Sonja, enjoyed attending the annual Colorado Cowboy Gathering, along with musical performances at the Arvada Center.

She is survived by daughter Jerrilynn Laimbock Tucker of Golden, CO, step-daughters Sonja Jill Charles (Tim Butler) Arvada, CO and Sandy Charles (David City, NE).  Also, three grandchildren Keith Castillo, and Megan (Jed) Salazar, and Kappi Hutcheson, and four great grandchildren, Vincent, Adriana, and Avien Castillo, and Mariana Salazar.  She was close with her nieces Gail Tinianow (Marty) of Denver, CO,  and Lynn Haas of Parker, CO  plus numerous nieces and nephews.  Her close friends and former neighbors in Arvada, CO, David and Debra Mitchell, and their children Violet and David Rose were a part of her family as well.

Interment will be in Elmwood Cemetery in Fruita, CO.  A celebration of life will follow, and be announced later.  In lieu of flowers, please consider donating to the charity of your choice.

A special thank you  to Collier Hospice on the Lutheran Campus, her friend Julie for being there for her, and for all the visits from her friends, cards received, and phone calls to brighten her days.  Just know you all held a special place in her heart!