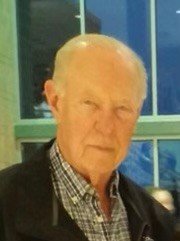 Jon Wesley Baier was born on June 30, 1941 in Atlantic, Iowa. He was the oldest child of Marjorie and Frederick Baier. He married Karen Helmts on June 8, 1963; and the couple soon moved to Denver, CO to pursue his teaching career.

After arriving in Colorado, he earned his doctorate in education and taught at Skinner Middle School for 40 years. A hard worker, he also worked at Sears for 35 years. A life-long history buff, upon retirement he and his wife visited every major Civil War battlefield. He was an avid Colorado sports fan and loved camping and fishing.

He passed away peacefully surrounded by family on March 23, 2021 after a short illness. He wanted to be cremated and his ashes will be spread at Steamboat Lake. Jon is survived by his wife Karen Baier, sons Mike (Angelica) Baier and Mark (Kaniah) Baier, as well as six grandchildren and one great-grandchild.

Weep not for me though I have gone

Into that gentle night

Grieve if you will, but not for long

Upon my soul’s sweet flight

Share Your Memory of
Jon
Upload Your Memory View All Memories
Be the first to upload a memory!