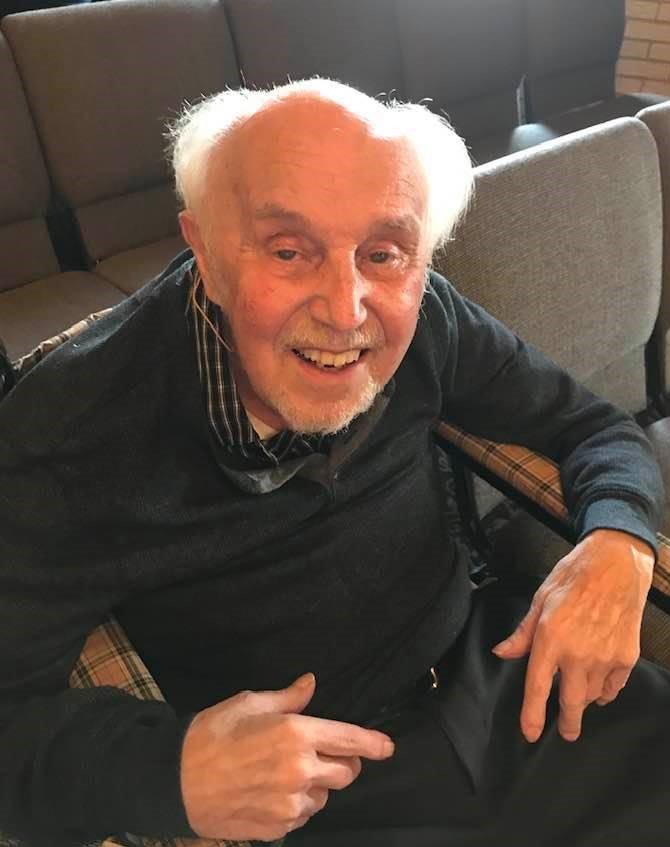 GAYLORD AARON KINDSCHY was born on August 28, 1930, in Dearborn, Michigan, which is part of the Detroit Metropolitan area. Gaylord was born to his parents, Clarence and Marie (Lebsack) Kindschy and had one brother, Clarence, who was four years older. Both sides of Gaylord’s family were from the Loveland, Colorado area but Gaylord’s dad had found construction work in the Detroit area – which is what brought them to Michigan.

Gaylord’s family, however, soon returned to Loveland, Colorado. The Kindschys and the Lebsacks were part of a farming clan that had emigrated to the United States as part of largescale immigration of German farmers from the Volga region of Russia – from 1870 until around 1915. The Czar had decided that the Germans had to now apply for Russian citizenship – most of the families chose instead to go to North America.

When Gaylord was five years old, his family had moved to Ogalala, Nebraska – again for a work opportunity. Gaylord remembers attending Kindergarten in Ogalala and seeing the dam being constructed for Lake McConaughey. Again, however, the family soon relocated to Loveland again. After a few years, Gaylord’s dad was approached by a dairy in the Denver area which was looking for an experienced “butter man.” Gaylord’s father fit the bill so they moved to North Denver, living on York Street. Gaylord attended schools in the area, finally graduating from Manuel High School as the Valedictorian. He graduated early and was offered several scholarships. Through most of middle school and High School, Gaylord was convinced that he wanted to be a Civil Engineer – But in his last year of High School, he reported that he had been called by God to be a minister of the Gospel. His school counselor was quite disappointed to hear of his new vocational goals – but Gaylord was undeterred. He headed towards gospel ministry and never looked back.

During his years growing up in Denver, Gaylord and his family became core members of the Denver Revival Tabernacle – under Pastor Cooper. Church life became the center of Gaylord’s life. He remembers going to church almost every night of the week and, of course, every Sunday morning. Gaylord had a special place in his heart for the Lord and was always sensitive to the Holy Spirit’s power and leading. Some of his most precious memories were those days spent learning at the feet of the theologian Cecil J. Lowry, who would regularly visit the church and would entertain Gaylord and his brother, the Cooper boys, Bill Barlow, and others. All of these “preacher boys” would go on to gospel ministry.

Throughout his childhood, Gaylord loved sports – particularly baseball and basketball. He loved fishing as well. In his later years, he even tried his hand at golf and tennis. After attending college at the University of Colorado and at Rockmont College, Gaylord was ordained and began his ministry as a traveling evangelist and musician. He soon married Sylvia Rettedal – a pianist in the church in Madison, South Dakota, which was pastored by Gaylord’s uncle, Herman Lebsack (and his wife Velma). Herman and Velma retained a very influential place in Gaylord’s life for the rest of his days. Gaylord and Sylvia traveled together for about five years until one day they arrived at a fledgling pioneer work on South Federal Blvd. in Denver, to lead a two-week revival. During that revival, the pastor of the church, Pastor Behr, approached Gaylord and asked him to consider “taking the church” as its pastor. Apparently, Pastor Behr’s wife was in poor health and needed to move to a lower elevation in California. After a time of deep prayer and conversation, Gaylord and Sylvia accepted the call to pastor Amazing Grace Church. For the next 65 years, they were faithful to that calling.

For the first four years or so, Gaylord and his family lived in the basement of the church, where a small parsonage had been built. It as challenging at times, as church members would just walk into their private home early on Sunday mornings… but they hung in there. That first year at the church, they had their first child, a son named Gaylan. In 1958, they had their second child, a daughter named Karen. The following year, in 1959, they had their third and final child, another daughter named Sharon. Around that time the church purchased a parsonage near Sheridan and Florida on South Ames – where Gaylord and Sylvia raised their children.

Gaylord turned out to be a very faithful shepherd and he worked and prayed tirelessly for many years. For four years in the early sixties, his brother Clarence was a co-pastor with him. In 1969, they dedicated a new wing of the church: a new sanctuary and a new Sunday School wing underneath. The church continued to grow and in the mid-seventies, Pastor Chuck VanderKooi came alongside Pastor Kindschy as his co-pastor for the next few decades. In the 1980s, his son-in-law, Joe Beach came alongside him and became the third long-time pastor of the church – along with Pastor Kindschy and Pastor VanderKooi. A few others came along as pastors over the years: as already mentioned: Clarence Kindschy, in later years, Steve Lichtenwalter, Sam Lopez, and Jan Buntrock joined the team for a while. In recent years, John Zimmermann has joined the pastoral team.

Throughout the seventies, the church was on the cutting edge of contemporary Christian music, started a coffee house ministry called Daniels’ Den, was very involved in the camping ministry up at Tremont Bible Camp, and had a high level of commitment to Sunday School. One of the passions of Pastor Kindschy’s life as Christian Education. He was very pleased to have had a full-time Christian elementary school in the church for many years: Amazing Grace Christian School began in 1982 and ran for around nine years, and then American Christian Academy began in 1991 and ran for around thirteen years, followed by a couple of years of Colorado Virtual Academy and other home school co-op programs.

Pastor Kindschy continued to love life, love sports, love fishing, love family, love to study history and read, etc., but his core love continued to be his Lord Jesus Christ and the ministry of the Gospel at Amazing Grace Church.

Pastor Gaylord Kindschy passed from this life on January 25th, 2020, at the age of 89 years. He was preceded in death by his parents, his brother Clarence, and his daughter-in-law Kristine.

He is survived by his wife, Sylvia, of Morrison,

His son Gaylan (and Suzanne) of Surprise, Arizona;

And Several other friends and relatives.

May his soul rest in peace with our Lord.

Share Your Memory of
Gaylord
Upload Your Memory View All Memories
Be the first to upload a memory!
Share A Memory
Send Flowers