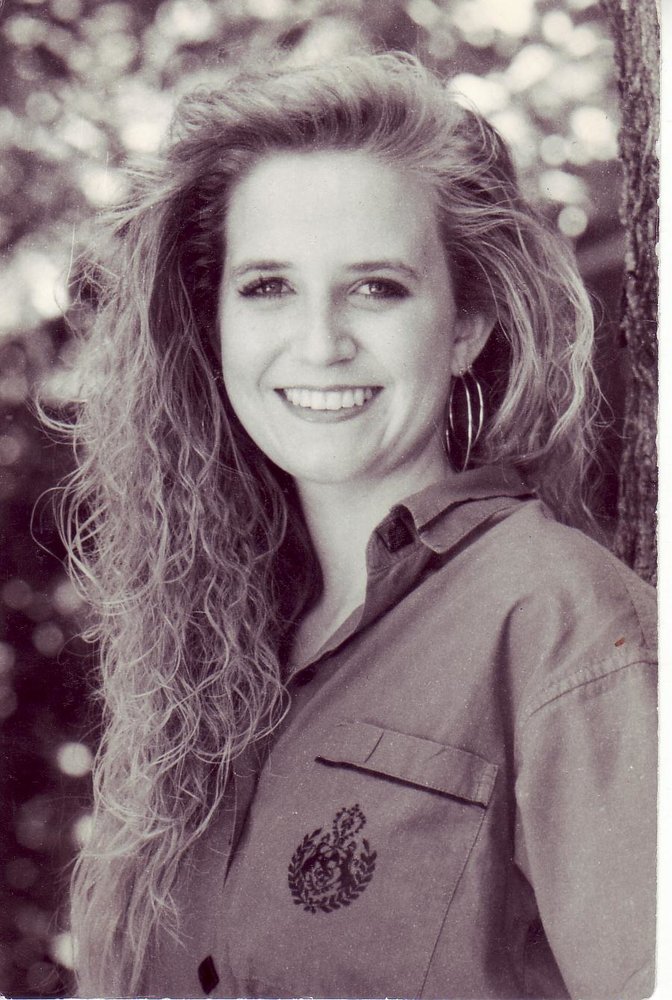 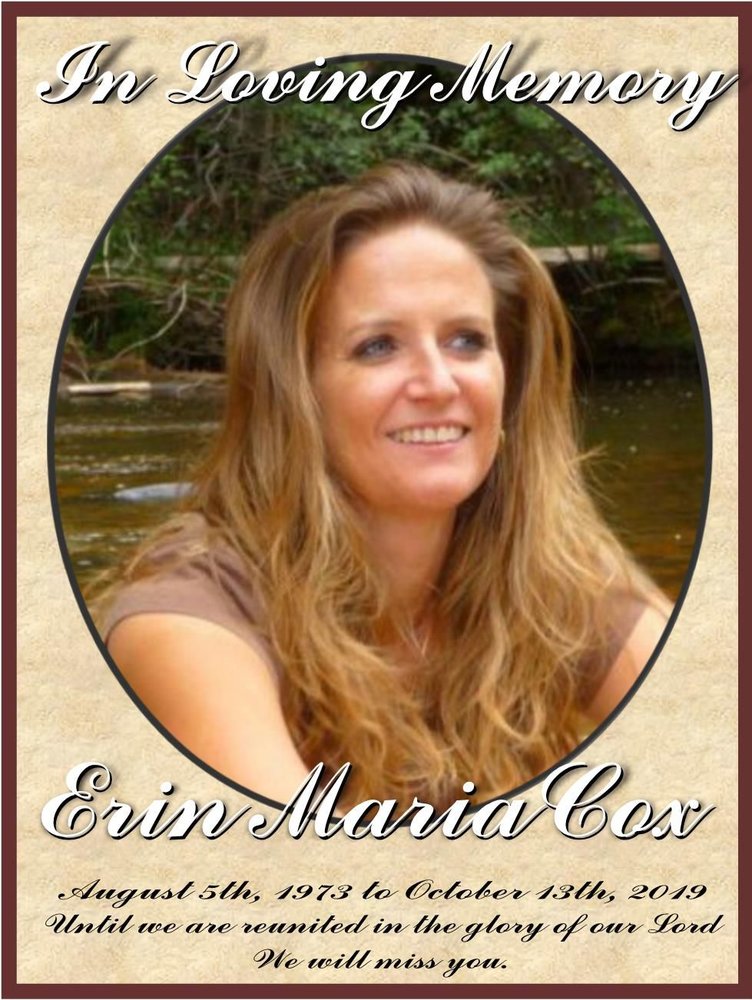 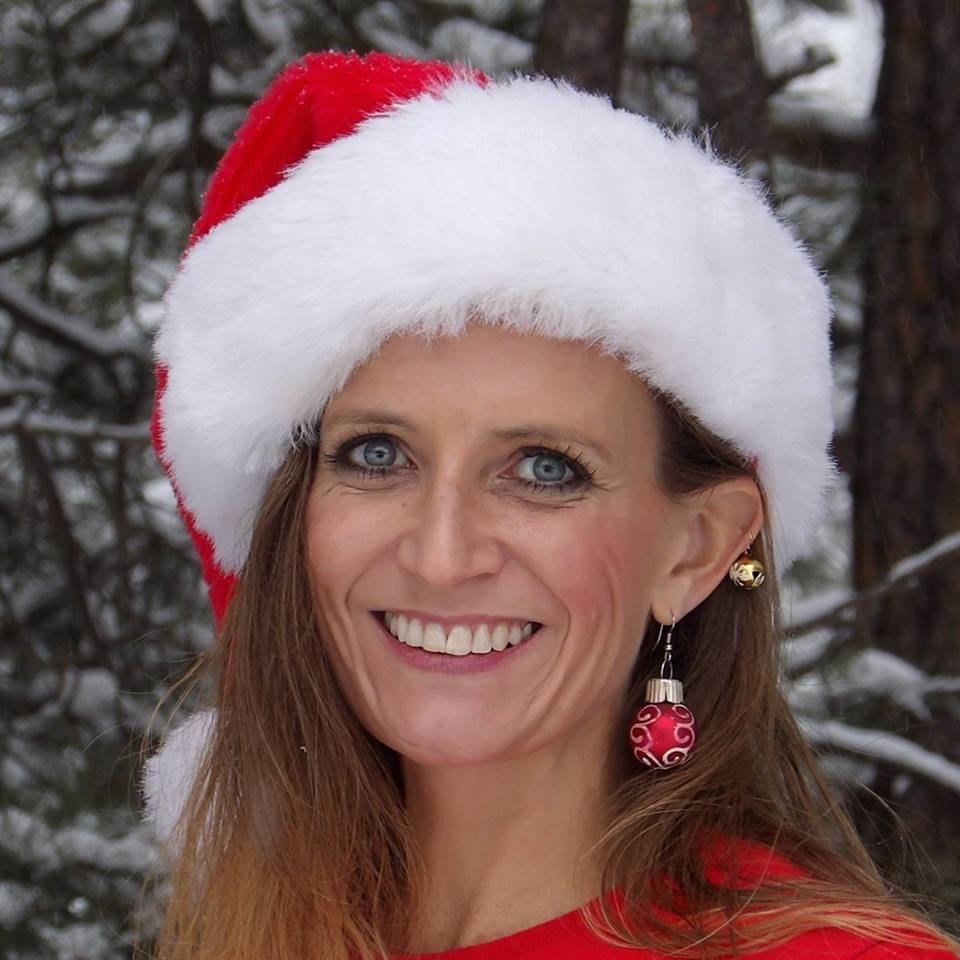 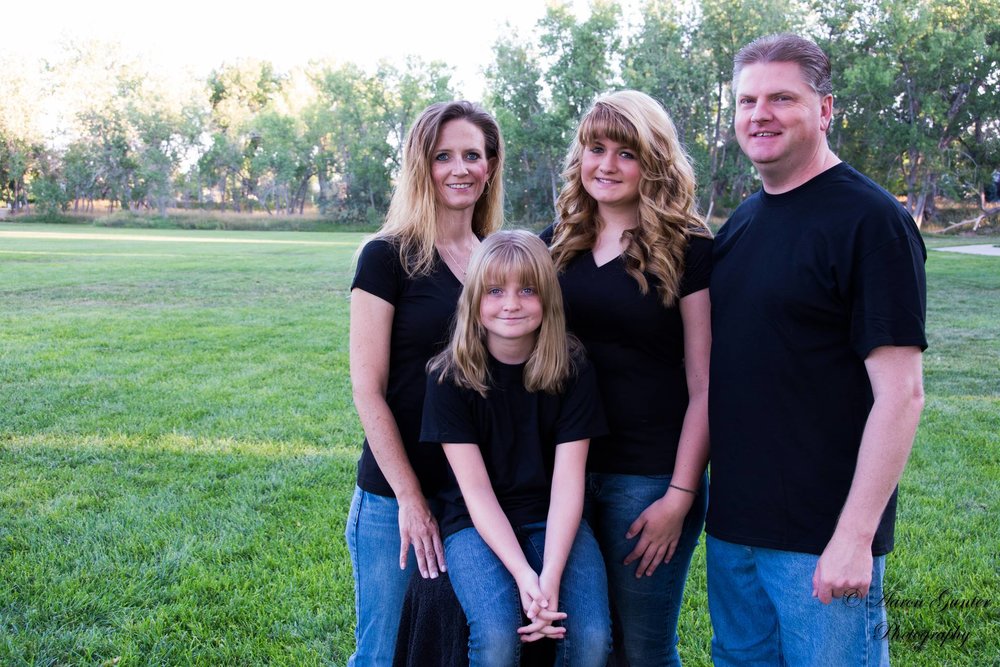 Erin Maria Gadbois was born in Denver Colorado, on August 5th, 1973. She was the 3rd and youngest child of Albert and Margie Gadbois.

Erin came home from the hospital as a newborn to South Denver, where she lived for not quite 2 years before the family moved to a mountain property in Coal Creek Canyon.

In 1980, the family moved to Arvada, CO. Erin was a very active child and spite being very accident prone was always involved in sports such as soccer and actives like Girl Scouts.

Erin first got sick with Crohn's and liver disease when she was 11 years old. she missed 3/4 of the 6th-grade year but was able to pass with flying colors due to tutors and homeschooling. Due to her illness, she did not have many friends, at least until Junior High. In 8th grade, she met her future husband. her friends knew she liked him and would whisper together, conspiring how to get two painfully shy kids together. One day one of her friends sat in front of him and dared him to chew her gum. He did! This melted her heart. She could not believe that he did it. she got his phone number, and they started talking. they were both shy, and getting acquainted was awkward. In the 9th grade, she pursued him but not much happened.

In the summer before 10th grade, she obtained her driver’s license. and hosted a sleepover at her house, and late at night, in pajamas, she and her girlfriends went to the store and ran into him and his clan of friends. She was very embarrassed, as she was in PJ’s but it didn't detour him. He asked her for her number, and he asked her out. From that point, they went steady.

Erin graduated in 1992. Soon after graduation, he had to move out as his parent’s house because it was being annexed by the city of Arvada, concurrently her parents were selling their house. This presented an opportunity and they got an apartment together, they did not have much, but it was fun for them to be together and on their own. The apartment was short-lived, they did not care for apartment life and the typical late teen parties. After 5 months They moved out and purchased a house. they were both working full-time and built credit through car loans and as teens, they made it work. They moved in on Halloween, and as they were moving in at the same time they were rushing to get the candy out as the trick-or-treaters started to appear.

The house needed painting and the carpet was well-worn. They painted first, and when the carpet was removed, they found lovely wood floors hidden underneath.

While at that house, Erin was diagnosed as needing a liver transplant and was put on the transplant list. They loved camping, she mentioned remembering a tent camping trip on an island at Grand Lake. The weekend after she got sick, and went to the ER. she had zero blood pressure! If they had still been camping, and not returned when they did, she would have died. It was then that she was immediately put on the transplant list. That altered their lifestyle and they decided to take it a bit easier.

She was told the waitlist for transplants would be about 2 years, and you are given a pager, and when the call comes, you have to come in right away. Her mom and she were at Walmart and She got the page. She thought it was too early so she did not answer the call. They called again. This time she answered, they raced home and rushed to the hospital. The next morning, she had a liver transplant.

She was in the hospital for 6 days then was sent home. She was home by herself, and made lunch and started to eat and got terribly sick, vomiting intensely she was rushed to the emergency room. and hospitalized several days. They thought it was a drug interaction. A week later, she was eating some Reese’s Pieces, and it happened again. Joe found a connection between the two foods that I had eaten - peanuts.

The donor had a peanut allergy. She went to an allergist, who reassured her that this was common, but eventually, the allergy goes away as the body adjusts to the transplant. Before she had the transplant, the doctors said she would not be able to get pregnant.

Three years later had her second daughter. Before the transplant, they put the house up for sale and moved into another house. Her parents moved in down the street. After the transplant, all seemed to be going well but then her husband's employer falsely charged him with theft, they were able to clear his name after 5 years of legal proceedings, but it cost them the house and forced them into rebuilding and re-establishing.

Her daughters are now 16 and 19. They have no major health issues. Erin was diagnosed with cancer in May of 2017. It was a rough year. In Jan 2017 we were in the process of filing bankruptcy. Her Mom had been experiencing Alzheimer's symptoms and broke her hip which started a downward spiral.

She died on Feb 7, 2017. Her mom left her and her sister and brother a financial legacy. Her sister and her family decided to go on a cruise, they booked the trip, and then several months later, she was diagnosed with cancer. but went ahead with the family cruise and had a great time in the Bahamas. As they were returning to Denver, and the plane descended the weight of cancer overcame her, and she struggled to keep it together. chemo started late summer 2017.

In November, on her youngest daughter's birthday, she had surgery, and an ileostomy was installed. The doctors thought they had removed the entire cancer, but she continued on chemo.

At the time they were living in Thornton, which was booming with construction, they decided to sell the house in Thornton and brought a 5-acre farm in Fleming, CO., just outside of Sterling.

As soon as they had passed the point of no return with the purchase, she was told that cancer had returned. we continued with our plans and went on. They are finally in their dream home.

“The girls are adjusting, but my health has interfered with enjoying the dream to its fullest.

I am not afraid to die, but I am concerned about how my death will impact my husband and daughters.

I want their lives to be able to continue.

I will miss seeing my daughters grow into adulthood and independence.”

Due to the nature of her medical condition and the transplant medication, Doctors were unable to treat the cancer. After a little over a week resting very peacefully in hospice.

Erin was a blessing to so many people and always kept her faith, never complained and will forever be an example of the child of God we all need to aspire to.

We will miss her deeply, but know she is Whole and free from pain and suffering in the presence of our Lord and savior.

A fundraiser has been established to assist the family with the medical bills and the girls at:

To send flowers to the family or plant a tree in memory of Erin Cox, please visit Tribute Store
Monday
21
October

Share Your Memory of
Erin
Upload Your Memory View All Memories
Be the first to upload a memory!
Share A Memory
Send Flowers