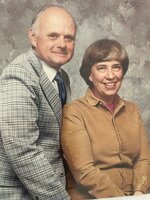 Clark Bublitz, PhD, was born in Merrill, Wisconsin, the son of Clark and Florence Bublitz. He graduated from Pillsbury Military Academy in Owatonna, Minnesota. He entered the U.S. Army at the end of World War II, and was stationed in Rome, Italy.

He returned to the country after the war and entered the University of Chicago where he earned a PhD in biochemistry. From there, he spent a year as a post-doctoral fellow at the Max Plank Institute in Germany under a future Nobel Prize recipient, Feodor Lynen, PhD.

Clark then became an assistant professor at the Johns Hopkins Medical School in Baltimore, Maryland, where he met his wife, Deborah Bublitz, MD, who was a third-year medical student at the time. They were married June 1, 1958. After a year at St. Louis University in Missouri, he accepted a position at the University of Colorado Medical Center in Denver, Colorado, where he remained until his retirement.

In addition to his research, Clark was an avid hiker, tennis player and Green Bay Packers Football fan.