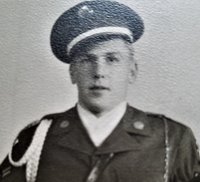 Fred Hoagland, longtime resident of Montrose, passed away July 6, 2021 at the age of 92. Born in Rifle, he graduated from Rifle High School. He was an All-State quarterback earning him a scholarship to Mesa College where he played football and baseball. Fred joined the US Air Force in 1950, serving with Air Police. He was a veteran of the Korean War and was honored to serve as Aide-de-camp to General McArthur during the General’s time at the airbase in Japan. After leaving the Air Force, Fred returned to Grand Junction where he met and married Virginia “Gin" Anderson, and became an insurance adjuster and federal arson investigator. Eventually making Montrose his home, Fred was an avid outdoorsman and loved to fish, camp, and find jeep trails to explore. This love of Colorado’s outdoors led to the perfect second “career” with the Montrose Visitor’s Center and Ute Indian Museum as the Volunteer Coordinator. He loved meeting people from across the world and sharing the beauty of Colorado. No one was a stranger and all who met him loved him. He will be deeply missed by his family, friends and those who knew him. He is survived by his sister, Helen Osburne, his two daughters, Alice Marie Anderson and Gail Hoagland, and his nieces and nephew.